__David Whyte__ (born 2 November 1955) is an English poet. He has said that all of his poetry and philosophy are based on "the conversational nature of reality". His book ''The Heart Aroused: Poetry and the Preservation of the Soul in Corporate America'' (1994) topped the best-seller charts in the United States - wikipedia 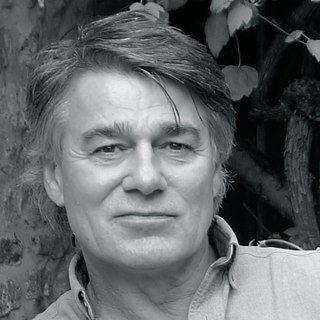 Whyte's mother was from Waterford, Ireland, and his father was a Yorkshireman. He attributes his poetic interest to both the songs and the poetry of his mother's Irish heritage and to the landscape of West Yorkshire. He grew up in West Yorkshire and has commented that he had "a Wordsworthian childhood", in the fields and woods and on the moors. Whyte has a degree in marine zoology from Bangor University - wikipedia

During his twenties, Whyte worked as a naturalist and lived in the Galápagos Islands, where he experienced a near drowning on the southern shore of Hood Island. He led anthropological and natural history expeditions in the Andes, The Amazon River and the Himalayas.

Whyte moved to the United States in 1981 and began a career as a poet and speaker in 1986. From 1987, he began taking his poetry and philosophy to larger audiences, including consulting and lecturing on organisational leadership models in the US and UK exploring the role of creativity in business. He has worked with companies such as Boeing, AT&T, NASA, Toyota, The Royal Air Force and the Arthur Andersen accountancy group.

Work and vocation, and "Conversational Leadership" are the subjects of several of Whyte's prose books, including ''Crossing the Unknown Sea: Work as Pilgrimage of Identity'', ''The Three Marriages: Reimagining Work, Self and Relationship'' and ''The Heart Aroused: Poetry and the Preservation of The Soul in Corporate America'' which topped the business best seller lists, selling 155,000 copies.

Whyte has written seven volumes of poetry and four books of prose. ''Pilgrim'' is based on the human need to travel, "From here to there." The House of Belonging looks at the same human need for home. He describes his collection ''Everything Is Waiting For You'' (2003) as arising from the grief at the loss of his mother. ''Pilgrim'' was published in May 2012. His latest book is ''Consolations: The Solace, Nourishment and Underlying Meaning of Everyday Words,'' an attempt to 'rehabilitate' many everyday words we often use only in pejorative or unimaginative ways. He has also written for newspapers, including ''The Huffington Post'' and ''The Observer''. He leads group poetry and walking journeys regularly in Ireland, England and Italy.

Whyte has an honorary degree from Neumann College, Pennsylvania, and from Royal Roads University, British Columbia, and is Associate Fellow of both Templeton College, Oxford, and the Saïd Business School, Oxford.

Whyte runs the "Many Rivers" organisation and "Invitas: The Institute for Conversational Leadership", which he founded in 2014. He has lived in Seattle and on Whidbey Island and currently lives in Langley, Washington, in the US Pacific North West; he holds dual US-British citizenship. He is married to Gayle Karen Young, former Chief Talent and Culture Officer of the Wikimedia Foundation. He has a son, Brendan, from his first marriage to Autumn Preble and a daughter, Charlotte, from his second marriage to Leslie Cotter. Whyte has practised Zen and was a regular rock climber. He was a close friend of the Irish poet John O'Donohue.

- Everything is waiting for you - The Bell and the Blackbird