Free will is the ability to choose between different possible courses of action unimpeded. It is closely linked to the concepts of responsibility, praise, guilt, sin, and other judgments which apply only to actions that are freely chosen. It is also connected with the concepts of advice, persuasion, deliberation, and prohibition. Traditionally, only actions that are freely willed are seen as deserving credit or blame. There are numerous different concerns about threats to the possibility of free will, varying by how exactly it is conceived, which is a matter of some debate - wikipedia 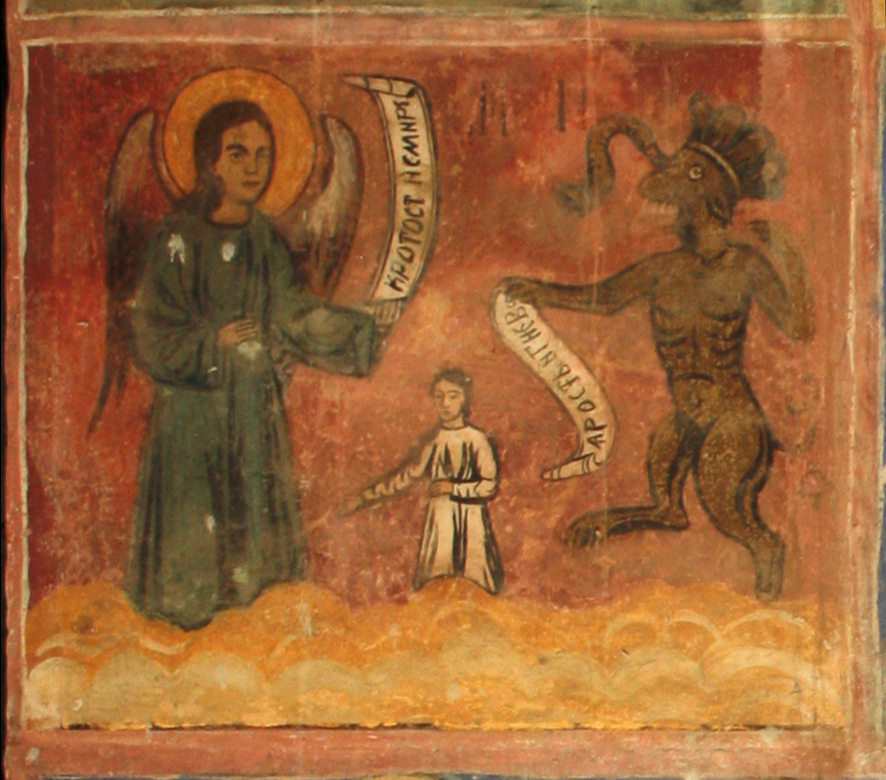 Angel with Temperance and Humility virtues versus Devil with Rage and Anger sins. A fresco from the 1717 Saint Nicolas church in Cukovets, Ternik Province, Bulgaria - wikimedia

Some conceive free will to be the capacity to make choices in which the outcome has not been determined by past events. Determinism suggests that only one course of events is possible, which is inconsistent with the existence of free will thus conceived. This problem has been identified in ancient Greek philosophy, and remains a major focus of philosophical debate.

https://www.podtrac.com/pts/redirect.mp3/audio.wnyc.org/radiolab_podcast/radiolab_podcast17revisitingfaultline.mp3 Revising The Fault Line - Radiolab. A fresh look at how, why, and who we blame.

In contrast, compatibilists hold that free will is compatible with determinism. Some compatibilists even hold that determinism is necessary for free will, arguing that choice involves preference for one course of action over another, requiring a sense of how choices will turn out. Compatibilists thus consider the debate between libertarians and hard determinists over free will vs determinism a false dilemma. Different compatibilists offer very different definitions of what "free will" even means, and consequently find different types of constraints to be relevant to the issue. Classical compatibilists considered free will nothing more than freedom of action, considering one free of will simply if, had one counterfactually wanted to do otherwise, one could have done otherwise without physical impediment. Contemporary compatibilists instead identify free will as a psychological capacity, such as to direct one's behavior in a way responsive to reason. And there are still further different conceptions of free will, each with their own concerns, sharing only the common feature of not finding the possibility of determinism a threat to the possibility of free will.