__''The Moral Landscape: How Science Can Determine Human Values__'' is a 2010 book by Sam Harris, in which the author promotes a science of morality and argues that many thinkers have long confused the relationship between morality, facts, and science - wikipedia

He aims to carve a third path between secularists who say morality is subjective (e.g. Moral relativism), and religionists who say that morality is given by God and scripture. Harris contends that the only moral framework worth talking about is one where "morally good" things pertain to increases in the "well-being of conscious creatures". He then argues that, problems with philosophy of science and reason in general notwithstanding, 'moral questions' will have objectively right and wrong answers which are grounded in empirical facts about what causes people to flourish. 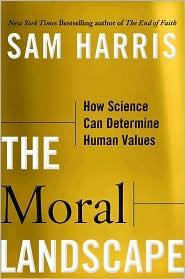 Challenging the traditional philosophical notion that humans can never get an 'ought' from an 'is' (the so-called Is–ought problem), Harris argues that moral questions are best pursued using not just philosophy, but the scientific method. Thus, "science can determine human values" translates to "science can tell us which values lead to human flourishing". It is in this sense that Harris advocates that scientists begin conversations about a normative science of "morality".

Publication of the book followed Harris's 2009 receipt of a doctor of philosophy in cognitive neuroscience from the University of California, Los Angeles with a similarly titled thesis: ''The moral landscape: How science could determine human values''.

Sam Harris's case starts with two premises: 1. Some people have better lives than others, and 1. These differences are related, in some lawful and not entirely arbitrary way, to states of the human brain and to states of the world.

The idea is that a person is simply describing material facts (many about their brain) when they describe possible "better" and "worse" lives for themselves. Granting this, Harris says we must conclude that there are facts about which courses of action will allow one to pursue a better life - wikipedia

Harris then makes a case that science could usefully define "morality" according to such facts (about people's wellbeing). Often his arguments point out that problems with this scientific definition of morality seem to be problems shared by all science, or reason and words in general. Harris also spends some time describing how science might engage nuances and challenges of identifying the best ways for individuals, and groups of individuals, to improve their lives. Many of these issues are covered below.

Harris attests to the importance of admitting that such facts exist, because he says this logic applies to groups of individuals as well. He suggests that there are better and worse ways for whole societies to pursue better lives. Just like at the scale of the individual, there may be multiple different paths and "peaks" to flourishing for societies—and many more ways to fail.